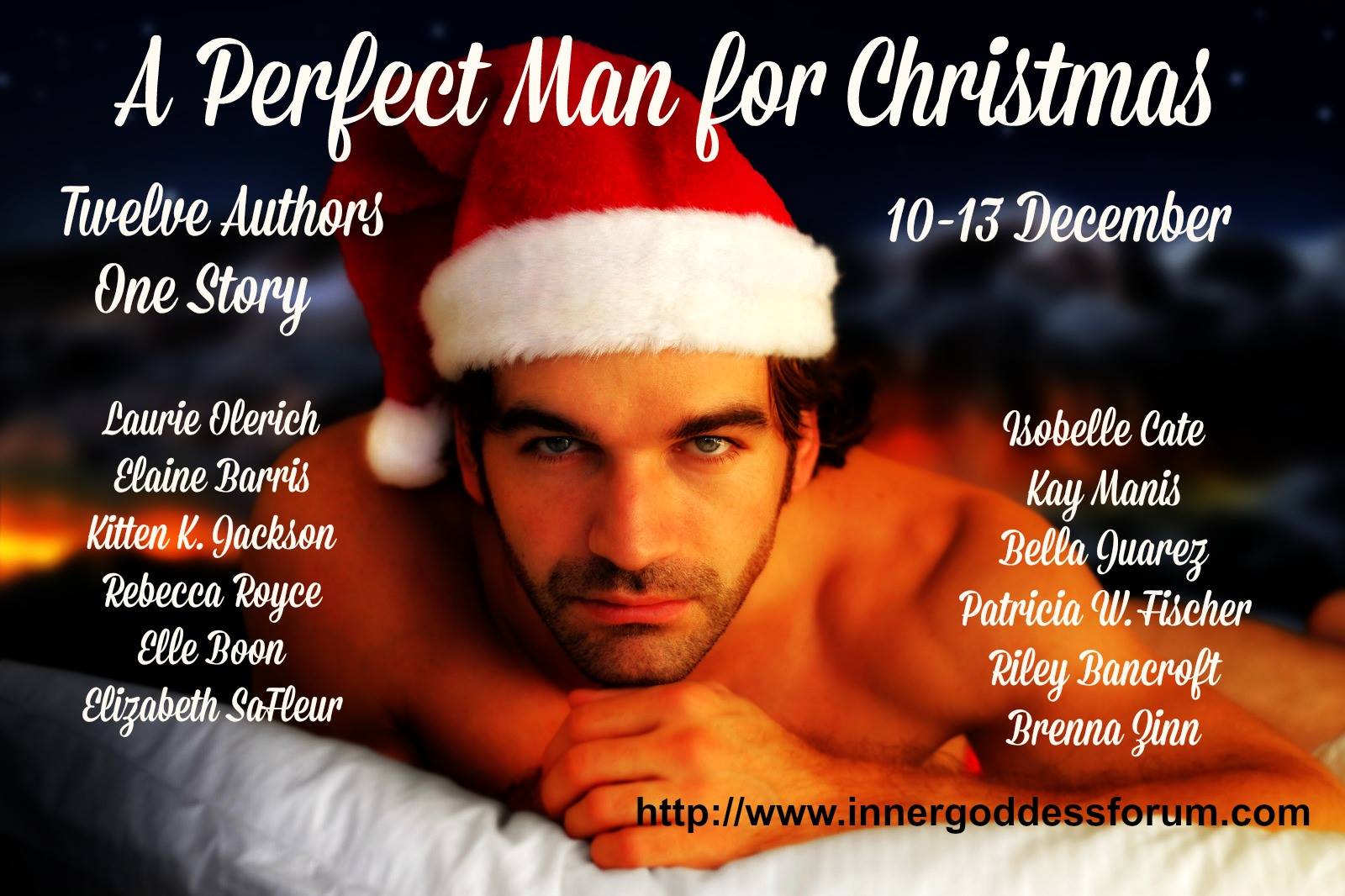 I really love this time of year. It’s finally starting to get a bit chilly outside (well, chilly for San Antonio) and it’s perfect for curling up and reading a great book or two or three. Plus, with the holiday season, what better gift to give someone (or yourself) than a bit of downtime to read a story that let’s you escape from the real craziness?

My first pick is A Perfect Man for Christmas.

She gave us each a chapter and the beginning of the story and away we went. I got chapter ten and what a blast it was to write.

The entire story has been posted on author Bella Juarez‘s website and yes, it’s totally FREE.

Know this, this an EROTICA which means it’s got very saucy, explicit scenes and quite colorful language so be prepared.

And while you’re at it, check out the other authors in the group: Elaine Barris, Kitten J. Jackson, Rebecca Royce, Elle Boon, Elizabeth SaFleur, Isabelle Cate, Kay Manis, Riley Bancroft, and Brenna Zinn.

You might find a new author and what better gift than to find an entirely new series?

If you’re not looking for erotica, but a spicy read, check out L.M.Gonzalez‘s No Accounting for Romance.

Laura Cortez, a single mom, works full-time and takes classes toward an accounting degree for a better income for her family. She meets her dream man on a blind date set up by their siblings but thinks she should have stayed home. When he asks her to his company’s Christmas party, she agrees against her better judgment; she’s attracted to him despite all the reasons she shouldn’t be.
Tony Alvarado has spent his life, ever since his marriage, building his accounting firm because his ex-wife nagged him constantly about money. When she divorced him, claiming he was always working, she took half his money, and his son. Now he believes women only date him because he’s rich. His reactions to Laura puzzle him, but he continues to see her because he can’t figure her out.
Will the holiday season help them forget the liabilities and balance out the miracle of love in adding together two lonely hearts?

Are you an Outlander Junkie anxiously waiting for Spring 2016 to arrive? While you wait, pick up Deborah Gafford‘s Highlander’s Bride.

Cruelly betrayed by the woman he loves, Alexander MacGregor vows it will be a cold day in hell before he gives his heart again.
But as next in line to become laird, he is given an ultimatum; wed a mysterious lass within five days or forfeit his lands and his birthright to become the next laird. Distrust and dark secrets urge him to refuse, but the duty he has trained for all his life compels him to comply. …At least in appearance.
Katherine Gordon wants nothing to do with the arrogant Highlander to whom she suddenly finds herself betrothed. His handsome looks, intelligence and great strength mean naught. Another man had seemed just as appealing, once. That was before she learned the treachery of a heart of stone hidden behind a handsome smile. She would not let her heart be broken again.
Forced together by fate, Alexander and Katherine agree on only one thing. Love is not to be trusted. Yet when nameless danger threatens Katherine, Alexander vows to move heaven and earth to save her.

What about a story that talks about second chances? Check out Emily and Einstein by Linda Frances Lee.

Emily and her husband Sandy Portman seemed to live a gracious if busy life in an old-world, Upper West Side apartment in the famous Dakota building. But one night on the way to meet Emily, Sandy dies in a tragic accident. The funeral isn’t even over before Emily learns she is on the verge of being evicted from their apartment. But worse than the possibility of losing her home, Emily is stunned when she discovers that her marriage was made up of lies.
Suddenly Emily is forced on a journey to find out who her husband really was . . . all the while feeling that somehow he isn’t really gone. Angry, hurt, and sometimes betrayed by loving memories of the man she lost, Emily finds comfort in a scruffy dog named Einstein. But is Einstein’s seemingly odd determination that she save herself enough to make Emily confront her own past?
Can he help her find a future-even after she meets a new man?

Not into fiction right now? Need a good kick in the pants for the new year? Check out the woman who owns Thursday night TV, Shondra Rimes as she talks about the year she said Yes.

The mega-talented creator of Grey’s Anatomy and Scandal and executive producer of How to Get Away With Murder chronicles how saying YES for one year changed her life?and how it can change yours, too.

With three hit shows on television and three children at home, the uber-talented Shonda Rhimes had lots of good reasons to say NO when an unexpected invitation arrived. Hollywood party? No. Speaking engagement? No. Media appearances? No.

And there was the side-benefit of saying No for an introvert like Shonda: nothing new to fear.

Then Shonda’s sister laid down a challenge: just for one year, try to say YES to the unexpected invitations that come your way. Shonda reluctantly agreed?and the result was nothing short of transformative. In Year of Yes, Shonda Rhimes chronicles the powerful impact saying yes had on every aspect of her life?and how we can all change our lives with one little word. Yes.

Got any requests?
Comments?
Want to tell me about an amazing book you’ve read?
Let me know, I’d love to hear about it.