And why not? Being the second only to Supernatural as the longest running science-fiction/paranormal show on TV, it ran for a decade and gave us over 200 fantastically intergalactic episodes.

For those who aren’t familiar with the show, here’s a quick run down. 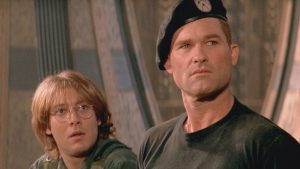 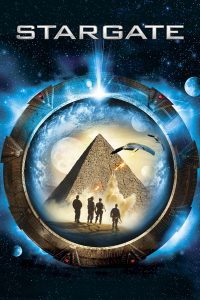 Based on the 1994 movie by the same name, the characters of USAF Colonel Jack O’Neil (one L) played by Kurt Russel and anthropologist Dr. Daniel Jackson played by James Spader who are sent to investigate “An interstellar teleportation device, found in Egypt, leads to a planet with humans resembling ancient Egyptians who worship the god Ra.” (IMDB)

The interstellar teleportation device or Stargate can create wormholes to other planets by “dialing” a series of characters, like a phone number.

A number is entered, the wormhole opens, and off goes O’Neil, Jackson, and team to the planet, Abydos. There, they encounter the very nice locals and butt heads with the Uber villains, the Gou’ald. These glowey eyed jerks, are parasitic aliens who enslave humans when they use them as hosts and take over their conscience decision making.
Afterwards, they go out in the universe to kill, conquer, and enslave more people.

Needless to say, this arrangement doesn’t bode well for our heroes, so they do their damage, defeating the wormy foes, but before they all head back to Earth, Jackson decides to stay as he’s fallen in love with the beautiful Sha’re, a hometown girl, and chooses to stay.

Before O’Neil leaves, he makes Jackson promise to destroy the Stargate so no one else can come back to hurt the people who live there. Jackson agrees and everyone goes back to their daily lives.

Then came along the TV series. Debuting on July 27, 1997, the first show, Children of the Gods, picks up about a year after the movie ends.
The Stargate on Earth located in the Cheyenne Mountain Military Complex, clicks on and low and behold, there are a lot more Goa’ulds than originally thought.

Being totally unprepared as to what to do, the military asks now retired Colonel Jack O’Neill (two L’s) to come back and help them figure out what’s going on. He tells them he knows very little and the person they should talk to is Jackson, who’s supposed to be on Abydos.
They dial up the gate address and find out that Jackson did not destroy the gate as he was instructed.

The adventures commence when Jackson’s wife, Sha’re, is taken when a super bad Gou’ald, named Apophis, arrives when our good guys are out of camera. The hunt is on to find Jackson’s wife and his brother in law, Skaara, who’s also been captured. 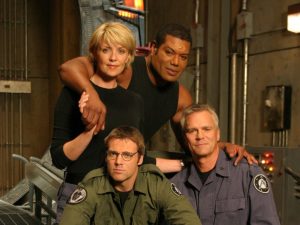 USAF Captain Samantha Carter (Amanda Tapping), who is also a theoretical astrophysicist and can more than hold her own as the third member of the team.
Rounding out foursome is Teal’c, the first prime of Apophis, a Goa’uld War Lord, who defects and helps the team and many other prisoners, escape from Apophis’s palace.

Hence, began the first of a decade’s worth of wild adventures, great one liners, and incredible banter that lasted until the last episode on June 14, 2007…plus a few movies.

Any SG1 fan probably thinks, “for crying out loud! We know all this.”

With all due respect, I’m sure you do, but I researched and found a five things you might not.

(1) How did they create the Stargate Burst Effect? 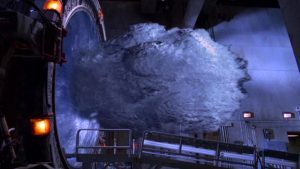 Before any adventure, we’d get the great visual of the Stargate’s low hum as it rotated and locked on the different gate addresses before the burst of energy that propelled outward.

But do you know how the special effects artists created it?

Only having the portal flip on light a light switch would have been super boring, so the artists used a combination of CGI and practical effects to cause the burst when the final piece of the code locked in.

The actual explosion that we see coming out of the stargate is what happens when you fire an air canon into a 500 gallon tank of water. Adding layering of the ripples of the water with strobe lights, angles and what other magic the special effects department threw in, we get the fabulous “burst” when SG-1 is about to hit the wormhole trail to go on their latest adventure.

Christopher Judge who played, Teal’c, had this perfect one word catch phrase that could be the ideal response in multiple situations. Delivered without irony or satire, Judge always met the mark and tone of the scene, but how often did he say it?

According to Screenrant writer Padraig Cotter, in the entire run of the show, Teal’c’s “Indeed” occurred 167 times where another online Stargate aficionado reports 154 times and a Syfy video has the stoic soldier replying “Indeed” 177 times. They all agree first time he says it as his one word response is season 2, episode 19 (One False Step) and from then on, it’s pretty much every episode.

If I average the three counts, I get 166 times. With 213 episodes in which he appeared, subtract the shows he didn’t say it [21 (for Season 1) and 18 for season 2)], this equals 174 so basically, every episode he has his one liner.
(If any of you watch the entire series again before I do, please keep track and send me an accurate number if this is way off.)

(3) How many different mythologies and legends did the creators pull from?

Starting with the movie, Stargate with Kurt Russel (O’Neil) and James Spader (Jackson), the entire premise was based on Egyptian mythology with the introduction of Ra (Jaye Davidson). Ra, just like any great bad guy, seeks world, or in this case universal, domination, and the hero team of O’Neil and Jackson stop him.

Once he’d been eliminated the movie ended happily ever after and everyone goes on their way. Right?

Wrong! Because there are plenty of other mythologically named adversaries hanging out in space, just wanting for their opportunity to pounce on unsuspecting worlds and civilizations.

Although they go back to Egyptian mythology to seamlessly tie the movie with the TV series, the series fans out to other antagonists named after deities from Egyptian mythology like Hadar, Amaunet, and Bastet.
The Greeks wanted in on the action with Ares, Cronus, and Thanos.
Not to be outdone, bring in the Babylonian mythology with Ishkur, Marduk, and Nem.
Add in Yu Huang Shang Ti from (Chinese) Xi Dynasty, Svarog from Slavic tales, Quetzalcoatl from Central America, Nirriti from India, Olokun from Yorubania, and Chalchiuhtlicue from Aztec myth, I’d say, they had a well rounded group of villains and characters.

Not to be outdone, our SG1 team had powerful allies in the way of the Asgardians.

No, not those Asgardians… 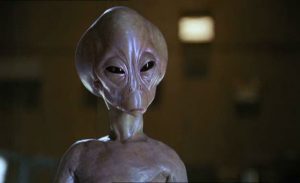 And yes, they meet Thor first who helps them with technology, escaping precarious situations, and simply think bigger in the way of dealing with the things that always go south.

FYI-The voice of Thor was that of actor Michael Shanks, who played Daniel Jackson.

All in all, the myths and legends of Central America, Egypt, China, India, Babylonia, Greece, Roman, Japanese, Celtic, and even Arthurian were layered in to bring more adventures and multiple storylines that always tied together.

(4) Were the military aspects of the show even close to being accurate?

Yes, in-fact, SG1 was the only TV show series endorsed and supported by the United States Armed Forces, and specifically the Air Force (USAF). The USAF even granted production access to Cheyenne Mountain complex for stock photos and video. This is why we see the entrance to the facility in just about every episode.

Additionally, members of the armed services read every script and helped brainstorm potential backgrounds for characters. They helped review the uniforms, military decorum, and ribbons and bars that an active duty officer would wear as well as help the writers understand how a military’s daily routine would be.

In September 2004, at the Air Force’s 57th Anniversary Dinner, actor Richard Dean Anderson was made an honorary brigadier general for his positive portrayal of an US Air Force Officer. The last actor to receive this award was Jimmy Stewart in 1987.

(5) Were Sam and Jack seeing each other outside of work? Did they ever get together?

Although, the series was good guys vs bad guys, the tension between Samantha Carter and Jack O’Neill could not be denied.
There were many moments when Jack looked at Sam like she was on the only person in the universe and she obviously cared for him. Their banter and mutual respect for how each got the job done and their commitment to saving the Earth from another  attack sent the screen on fire more than a few times.

Even in the Season 8’s episode (Moebius) where there’s an alternative timeline, the two share passionate kisses only for the reality to set in at the next week.

Because of military rules, they could not date or get involved while they worked together and certainly not while he was her boss, but Jack did retire and he was no longer her boss in seasons nine and ten.

So, did they get together or not?

I did some digging and found this deleted scene from Stargate Atlantis where Sam and Dr. Jennifer Keller (Jewel Staite) make small talk as they try to figure out how to get out of a precarious situation.

I’d say that’s a big yes, but no idea why the creators would’t want to keep this in the show as the Stargate series had ended.

These are only a few questions I wanted to answer about the series.
What are some of the other unanswered questions from SG1 you’d like to know?

Drop them below and I’ll see if I can find them out.