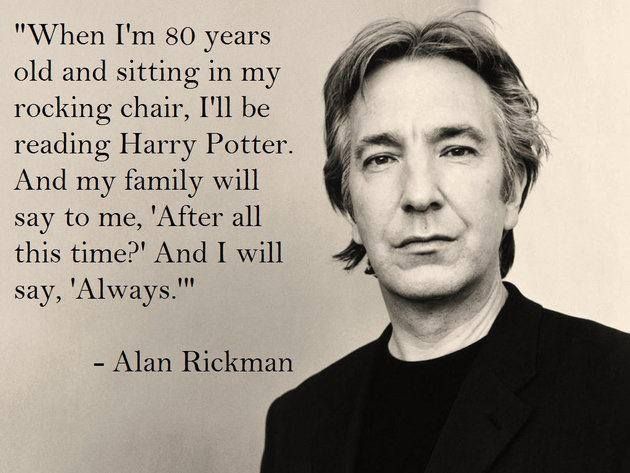 My heart is devastated.

Within the past half hour, I’ve heard of the news of actor, Alan Rickman‘s, passing. How does someone like me become an hysterical sobbing mess because of the death of a person she’s never met?

I’ll tell you why. Because when someone is truly great at what they do, no matter if it’s acting, painting, music, sports, law, medicine, etc, their affect on the world reaches far greater than they could even fathom. When they pass away, those they have touched with their skill, can feel such profound sadness that it brings on tears too fast to wipe away.

Alan Rickman has been one of those people for me. The cadence of his voice had always been something I anticipated in any movie he appeared. The smoothness of his dialogue, the all-knowing smirk, the eloquent eyebrow raise, were all what made Alan Rickman one of the most magical actors to watch.

I’ve never met the man in my life, but I followed him ever since that iconic role of Hans Gruber in Die Hard.

From his bad guy roles from there went from Quigley Down Under to Robin Hood: Prince of Thieves.
Although I’d learned to see him as the ultimate baddie, I loved the role in Truly, Madly, Deeply. There he plays the deceased husband trying to help his wife continue her life instead of staying stagnant in her grief. I liked the story and loved that he wanted to diversify his roles.

Audiences didn’t respond to it as well because they’d come accustomed to seeing him as anything but a loving spouse.

I didn’t see him much in film for a couple of years and I noticed his absence, but then he arrived again and oh my! how he arrived.
As the endearing and understated Colonel Brandon in the Oscar Award-Winning screen adaptation of Jane Austen‘s Sense and Sensibility, Rickman steals the audiences’ hearts before the heroine realizes just how amazing he is.
Here, he reads to a Marianne Dashwood (Kate Winslet), who’s recovering from pneumonia and shows us all that nice guys are truly worthy of a second, if not third (and many more), look(s).
His gentle way of speaking as he reads to her and the way his eyes light up when she asks him not to be gone long on his journey, is no less than swoon worthy.
A wonderfully different and loving role for Mr. Rickman and one that made me joyous of his return to the screen.

There was Love Actually, Dogma, Bottle Shock, and the disgruntled Alexander Dane in the underrated comedy Galaxy Quest.

But the role he totally captured my heart in was Snape. Severus Snape. The teacher of the dark arts, the former Death Eater, the hater of Harry Potter‘s father and a most reluctant hero of the Harry Potter Series.
How I loved Snape and J.K. Rollins way of writing him. As beautiful of a character as she wrote, giving us Easter Eggs along the way of his potential goodness, it Alan Rickman breathed life into him on screen, helping him come full circle. For almost seven books she kept us guessing on who Snape really was.

SPOILER ALERT IF YOU’VE NOT READ THE SEVENTH BOOK–HARRY POTTER AND THE DEATHLY HALLOWS.

Again, I was reduced to tears while I read the iconic scene where Snape reveals all to Harry. All the while, I’m picturing Mr. Rickman in this moment, his tears streaming down his face as he he tells Harry to take them so finally Harry can understand all that has happened.

For seven and a half movies, I watched this character brood, storm around the halls of Hogwarts, defend the children (Prisoner of Azkaban) only to end with him dying, defeated and beaten, to give his last moments, his last breath to the young man we all thought he hated. Truly heartbreaking.

Even writing this, I am in tears. How brilliant you are Mr. Rickman.

Thank you for sharing your gift with us. You made the world a better place because of it and I will cherish the roles you gave us…always.